A trip to real England 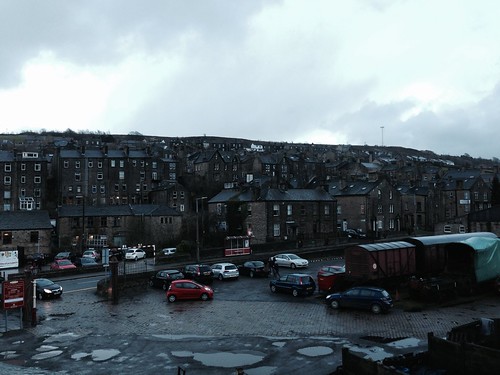 Although it was a bit while ago, I made a private trip to the United Kingdom. It was not the British Hills, not an English village, not a British-style cottage in Tochigi Prefecture, not any other “fake Britain” in Japan. It was the real England, where I had wanted to visit before I died. I visited London and Haworth, West Yorkshire. Both of those places were introduced in Japanese manga, Emma, by Kaoru Mori, which was one of my favourite comics I’d ever read.

I bought an air ticket to London via Colombo, Sri Lanka by Sri Lankan Airlines because it was the cheapest route. A transit in Sri Lanka was not bad, as I expected to get some Ayurvedic medicines or goods at Colombo Airport. 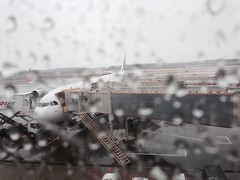 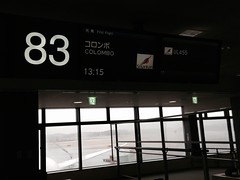 It snowed a lot in the Tokyo area when the plane was departing Narita Airport. Some flights were cancelled, and the flight to Colombo I was on board was about to be affected, but it managed to leave Narita. The plane arrived at Bandaranaike International Airport after flying for almost ten hours. 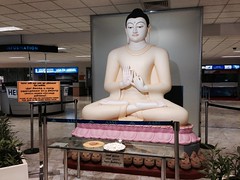 The big Buddha statue greeted us. Yes, Sri Lanka is a Buddhist country, and various kinds of golden Buddhas were sold at many souvenir shops there.

There was a chemist inside, but it was selling mainly “normal” pills and not so many Ayurvedic medicines as I expected. All I bought was this supplement sold for just 3 USD. 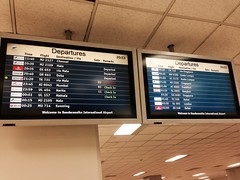 I had to wait inside the airport building for about six hours and a half for the next flight to London. There was a free WiFi hotspot, but it was time-limited and became not available after a certain time had passed. Not being able to kill time browsing websites and accessing Facebook with my smartphone, I spent a long boring moment until the boarding time of the flight to London. 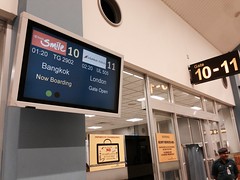 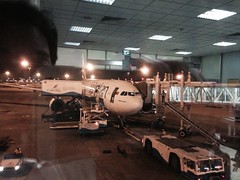 It became 2.00 am, and the gate for the next flight was opened. An officer checked each passenger’s passport and boarding pass. In my turn, he took my passport, opened the picture page of it, and strictly checked if the passport was real and I should be a real holder of it, looking over the picture page through a special magnifying glass, as well as looking from the picture to my face many times. I managed to pass the screening and could get on board. There seemed to be no other Japanese passengers.

The seat was a bit filthy, and the folding table was almost broken. I found the Ayurvedic tea set in the in-flight duty-free catalogue and ordered it to the nearest flight attendant. He accepted, but he didn’t bring it to me until the time just before the landing.

The plane flew over the western part of India, Oman, Iran, and Turkey, got across the Black Sea, and then passed Bucharest, Budapest, Vienna, Nürnberg, Frankfurt, and Brussel before landing to the Terminal 4 of London Heathrow Airport at 8.45 am.

At Heathrow Airport, we got off the plane, followed the signs, and walked to the immigration counters. An immigration officer, covering a hood on her head and looking like an immigrant from another Islamic country, asked me strictly, penetrating, and detailed questions I hadn’t experienced in any immigration counter of other countries I had ever visited. She looked at my passport and immigration card, scanned the fingerprint of my fingers. She pointed out that the “occupation” section of the immigration card was blank and asked what my occupation was. I answered that I was an engineer working for a telecommunications company.

She then asked, “Where are you planning to go?” I answered, “To Haworth, West Yorkshire.”
“Why Haworth?” she asked.
“Because I’m interested in Brontë sisters, ” I replied.
“What books did you read?” she then asked.
“Wuthering Heights,” I answered, though actually, I hadn’t read it to the end.
“Any other one?” she asked.
“I had no time to read other books,” I managed to answer because I couldn’t call them up at once.
“How are you going to Yorkshire?”
“By train.”

After some additional questions she asked, she stamped on a visa page of my passport and let me go. I was able to enter the United Kingdom. 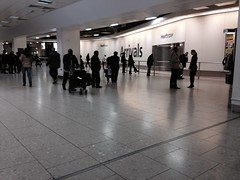 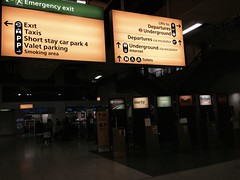 The UK had no characteristic smells, while the mainland of the United States smells cinnamon, Hawaii is fragrant like tropical fruits, Singapore has a spicy flavour, and China has oily smells.

The first thing I did was to get a SIM card. Fortunately, there was a SIM card vending machine just to the left of the exit. I got EE’s SIM card for £30, put it into my iPhone5, and turned it on. The activation process was a bit complicated, but I could do it. 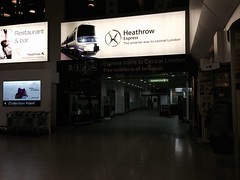 Then I went to the counter of the Heathrow Express and had my Brit Rail Pass ticket activated. The ticket became valid four days from that date. 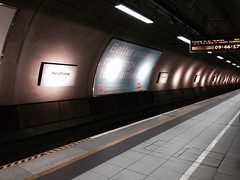 I caught the train to Terminal 3, where I got on the first-class coach of the Heathrow Express to Paddington. There were one-row seats on each window, and each seat had a socket for charging a mobile phone or a PC. 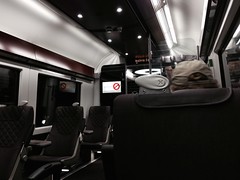 After a short while, the Heathrow Express arrived at Paddington. The station was gorgeous. You couldn’t find any station in Japan that was as decorative as that.

I tried to take Tube at Paddington to go to King’s Cross/St. Pancras station, but the entrance of the Tube station was closed, and I couldn’t get inside. I didn’t know exactly why.

I changed my mind and caught a cab to King’s Cross station at the taxi stand near the Paddington Tube station. The cab drove a bit long-distance on Marylebone Road from Paddington. It cost £12 and a tip to get to King’s Cross. 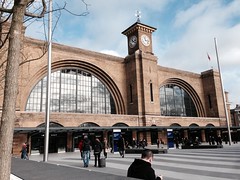 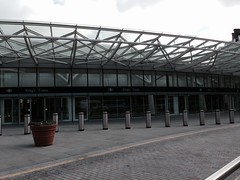 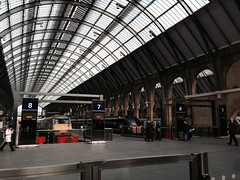 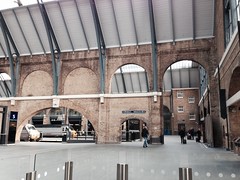 The King’s Cross station is the terminus of trains departing to northern areas of England and Scotland and is one of the important scenes of Emma as well. A dignified old building and a sophisticated modern one were standing together. 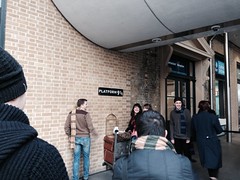 This station is also famous in Harry Potter’s novels. In the concourse, there was a Harry Potter souvenir shop and the Platform 9 3/4, the starting point of the Hogwarts Express. Many people were queuing up in front of it to take some pictures. I didn’t understand how blessed it was as I’d never read Harry Potter.

I got on the train to Leeds. In the first-class coach, a complimentary light meal, as well as a glass of orange juice and a china-cup of tea (and sometimes a can of beer!), was served for passengers. You wouldn’t have such wonderful service even in the Green Car of Japanese Shinkansen.

The train ran for about two hours and a half and arrived at the Leeds terminus.

A local train going for Keighley came to a short while later.

I arrived at Keighley after about 30 minutes’ train ride. This station is connected to the platform of Keighley & Worth Valley Railway operating diesel and steam trains to Oxenhope via Haworth every weekend.

It was Sunday, so a steam train and a diesel one ran every one hour in turn. Fortunately, I’ve had a steam locomotive engine! 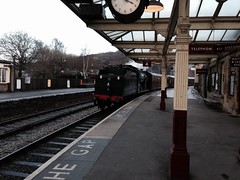 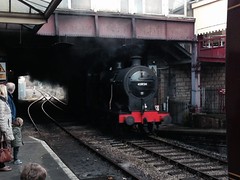 The train ran very slowly for several miles for 20 minutes. It finally arrived at Haworth, where William Jones visited his beloved Emma working in Mölders’ manor house in Emma.

Haworth station was a tiny station where there was a small building with a cosy waiting room and a gift shop.

I left the station to the B&B where I was going to stay, drawing my luggage through Central Park and going up on Main Street.

Heathfield Bed & Breakfast, where I stayed, was on the top of Main Street.

Opening the door of the B&B, a master, his wife, and a little dog greeted me. I talked with them for a while, having a cup of tea and a blueberry muffin in the reception room. They said that they had been mobile priests working in the car in Australia, and had returned to England several years ago to start up this B&B in Haworth. They added that they had been interviewed by Keiko Igata, a magazine editor and one of the gurus of the British culture so that their B&B had been part of the article of the travel magazine she had published. 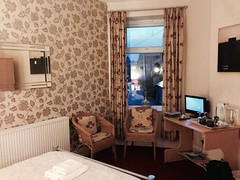 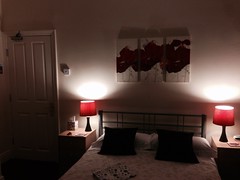 The guestroom was cosy and comfortable where you could view the Main Street from the window. There were some DVDs of Wuthering Heights and other Brontë-related films near the telly so that I can watch them.

The master told me that the Old White Lion Hotel near the B&B served a good meal, and gave me a discount coupon of it. 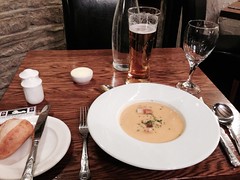 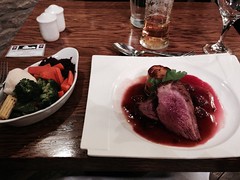 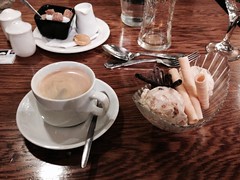 This dinner was delicious. Not only this but any other meals I ate in England were nice, from restaurant dinner to the light meal at a deli. I know that people often say that British foods are not tasty. Still, I think it is, in fact, the comments by such people that are too fussy with food to accept different foods from what they are used to eating daily.

(To be continued to A stroll in Haworth)