Estonia, one of Baltic countries becoming independent of the Soviet Union along with Latvia and Lithania in early 1990s, is one of IT conscious countries with significant numbers of IT-related startups including Skype. Estonian government is making its best efforts to make a “digital country” by inviting IT engineers to a number of offshore development sites in Europe’s IT market.

The government issues Estonian citizens an ID card, just similar to a Social Security Card in the United States, which enables holders to offer one-stop services including taxation, online banking, issuing medical prescriptions, and more. In addition to offering an ID card for real residents, it started the e-Residency scheme, which is available for not only residents within Estonia but people who don’t really live in Estonia. In this scheme, an “e-Residency Card” is issued to the “e-Residents” of Estonia and similar services to those for real residents are offered “electronically” with the card via their computers.

Application for an e-Residency Card is easy. First you have to visit the application page of the e-Estonia website at https://apply.e-estonia.com/. And then you can apply for the card by filling in necessary information in the form of the web page and paying €50.99 online by credit card. You can make the card to be sent to any Estonian Embassy outside Estonia so that you can pick it up at the nearest Embassy without flying to Estonia. About one month from the online application the card will be ready, when you will receive notification by email.

I applied for my e-Residency Card in this August and one month later an email from the First Secretary and Consul of the Embassy arrived at me saying that my card had arrived and I was requested to tell him when I was going to pick it up. I made an appointment with him and visited the Embassy, which looked a cosy little house in the quiet residential area of Tokyo. 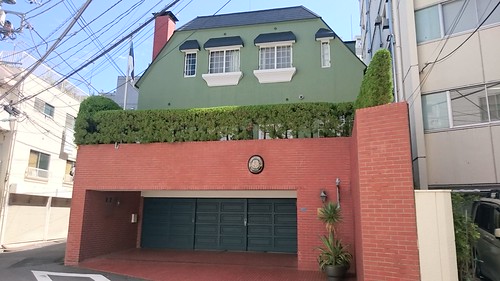 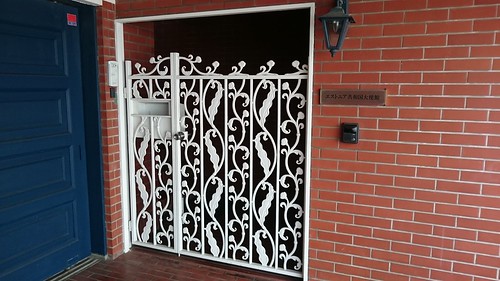 I pushed the bell on the entrance gate. The electric lock of the gate was unlocked and I heard a man’s voice through the intercom telling me to come in. When I came in, a gentleman stood in front of the door. He invited me in the house, and told me to sign up in a notebook put on the desk at the entrance. I wrote down my name, the date and the purpose of visit on the notebook.

Then he invited me to a big table in a dining hall and told me to have a seat. He asked my name and then asked me to show him my passport as identification. I presented it to him. He checked carefully the passport’s photo page where my name was printed, and brought it to a PC a bit afar from the table to input some data.

Several minutes later he told me to come in front of the PC and let him take my fingerprints with a small fingerprint scanner connected to the PC. He told me at first to put my right hand’s first finger on the glass surface of the scanner, press it firmly and hold it. It was quite difficult to scan the finger neatly, because scanning failed when I pressed the finger on the glass surface too strongly or too weakly. Every time it failed, he asked me to retry. Repeating five or six times, he told that my fingerprint was successfully scanned. He told me to release the finger from the scanner and put my left hand’s index finger as well. We did the same thing several times like we did for my right hand.

He said that only my index fingers were scanned because I was Japanese, and all ten fingers would be scanned for Chinese and Phillippino or like that.

After finishing the fingerprint scanning, we got back to the table and he presented the e-Residency card with a starter kit. 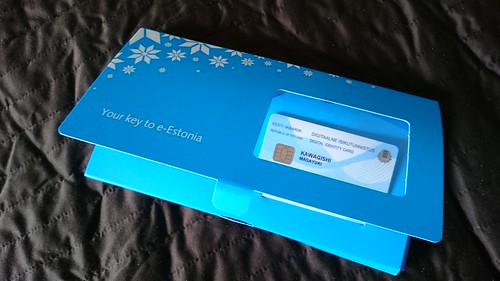 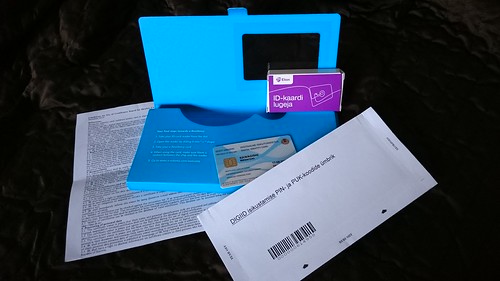 The starter kit contained an e-Residency Card along with a sheet where terms and conditions was written, an envelope PIN codes were written inside, and a purple box a card reader was in. The terms and conditions sheet had signature lines in its lower part. When receiving the kit, I signed on one of the lines for the confirmation of receipt, and he countersigned on the other line. He cut off the lower part of the sheet including our signatures and took it. The envelope was where two different PINs and a PUK code (used for recovery if login is locked out because of typing wrong PINs three times) were written. He said that the PIN1 is a 4-digit number for identification, and the PIN2 is 5-digit one for digital signature.

In the purple box was a card reader, used for reading my e-Residency card in a computer. It can be used by pulling out the USB connector and inserting the card into it so that the reading tip can cover the microchip of the card like this: 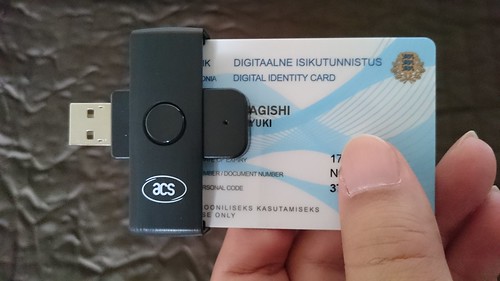 According to what he explained, it is available for both a PC and a Mac.

To be honest, I’m not sure what I can do with this e-Residency Card as I’m not planning to live or work in Estonia right now. All what I’m planning with this card is that, if possible, I’m going to open a bank account in Estonia to move some money I have in Japan to the Estonian bank so that I can assure some of my assets in a Eurozone country. He advised me that the banks of Estonia wouldn’t allow opening an account online and would require applicants to come in person to meet face to face to prevent from money laundering or funding terrorists, and that they would also require applicant’s residential address within Estonia to open an account at that moment. He added that they were discussing how to improve the process to open bank accounts for e-Residents. I believe that, if it becomes possible for anybody, an e-Resident or a real resident, to open an Estonian bank account, it would be a golden chance for Estonia to collect huge amount of money from all over the world. 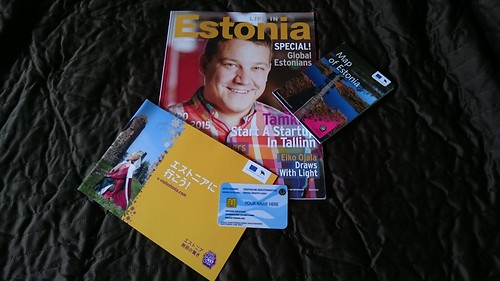 When leaving the Embassy he gave me a magazine and some booklets introducing Estonia. I want to visit Estonia some day and, if I can, open a bank account there.