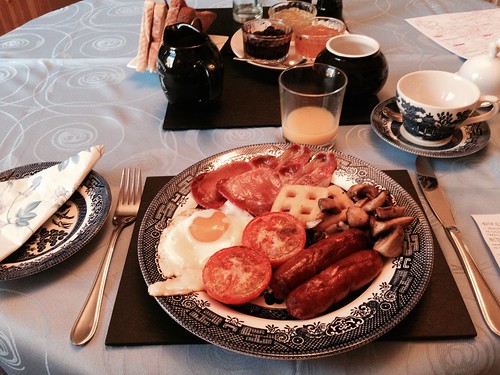 Breakfast served at Heathfield Bed & Breakfast was really British-style, with a fried egg, fried potatoes and mushrooms, a fried tomato cut in half, two slices of bacon and two sausages as well as cereals, slices of bread, a glass of orange juice and a cup of tea. I have a good appetite for breakfast in England, because when it’s a breakfast time in England it’s the time to have dinner in Japan where it’s nine hours ahead.

During the breakfast the master and his wife talked to me and made some conversation. It was a little hard for me to speak English while eating. Still, it was fun to talk with them. He brought me a copy of the pages of Haworth printed out from a travel guidebook, saying “It’s the article in Japanese I chose for you.”

Actually it wasn’t Japanese, but I received it gratefully, not pointing out that it was written in traditional Chinese instead of Japanese. At 9 o’clock in the morning I got out of the B&B to walk around the village centre and the Haworth Parish Church. I found that there were a group of Japanese tourists coming there by coach. 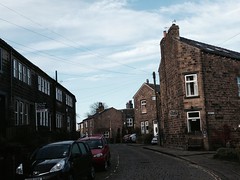 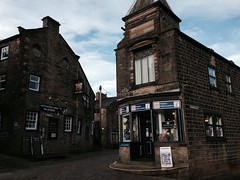 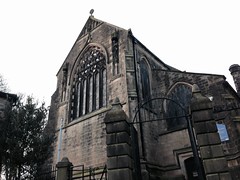 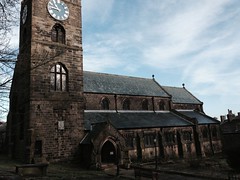 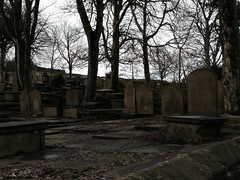 This is the site of the school where Charlotte Brontë taught her pupils. 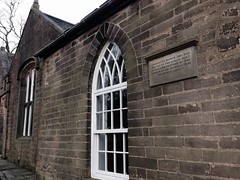 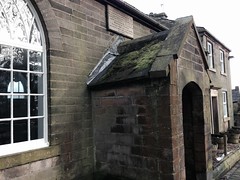 I found Brontë Parsonage Museum just opposite to the school, but it was closed in that season due to remodelling. All I could do was to take some pictures of it from outside. 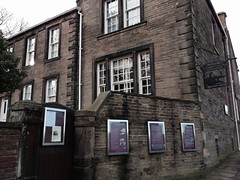 At first I wanted to walk on the moor to the Brontë Waterfalls, but I soon realised that it was impossible as I found the public footpath was too icy, muddy and slippery to walk through with my chukka boots I wore at that time. I didn’t want to stain my trousers with mud mixed with dung of sheep and horses. Instead, I walked on Dimples Lane, Field Head Lane and Upper Marsh Lane seeing the scenery of both sides of the road, crossed Moorside Lane, and then walked on a farm road in the Haworth Moor to the place to be able to walk.

Standing alone on the tranquil land of the boundless moors covered with heather for hours, I felt the stress by hectic daily work in those days being completely healed. I then returned back the farm road to Moorside Lane, and walked this lane looking the Haworth Moor on left to Cemetery Road, where I walked towards Main Road. 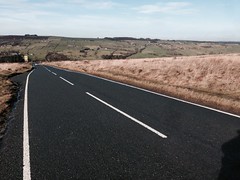 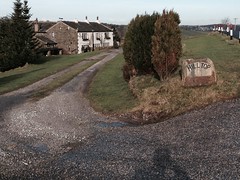 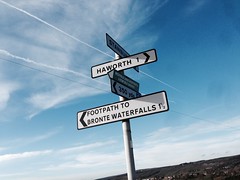 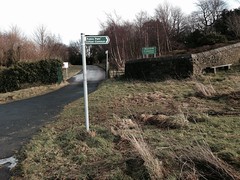 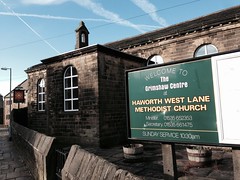 Back to town, I had a hummus and falafel sandwich set for lunch at Cobbles & Clay, a kosher restaurant the mistress of Heathfield B&B had highly recommended. 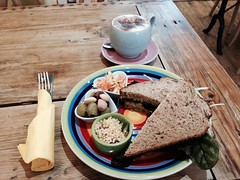 I made some shopping. I bought a woollen jumper at Edinburgh Woollen Mill, bottles of lavender essential oil and some cakes of soap at Rose & Co. Apothecary, some candies at a sweets store, and a heavy-duty traditional coat at an antique shop (costing only £30!). Most stores were closed at 5 pm, though. 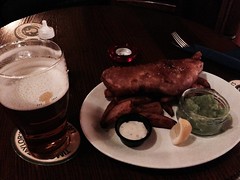 At night I went barhopping. At first I entered the Black Bull, where Branwell Brontë, the brother of Emily and Charlotte, had frequently come and drink. I only drank a pint of beer there as no foods were served at that time. Next I went to Fleece Inn and then I ordered fish & chips as well as a pint of local ale. 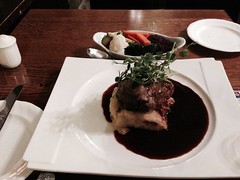 At last I had a proper meal at the Old White Lion. (To be continued to A walk in London)